The Quest for Snapchat Spectacles: The First Wearable

It all started last September when Snapchat made a big announcement; They were changing their company name from Snapchat to Snap Inc. and becoming a camera company. Their first hardware product? Spectacles. The idea behind spectacles was pretty straightforward. It would be a video camera integrated into sunglasses, to record memories in the same way you experienced them, to be released soon. “Soon?” Soon.

After watching the promo video and reading the press release I was intrigued by this “stylish” entry into the wearables market. At $130 for a very unique wearable video camera that worked seamlessly with Snapchat. The hardest decision to make about buying them would be which of the three colors to choose. There was one problem still. No release date. Days past.

Then weeks. Huge building size ads would appear with nothing but a picture of a model wearing a pair of Spectacles and no words to tell us when. TSA security trays were lined with their cartoonish logo-eye it seemed just to taunt us. Were we all being trolled? Was this just a Snapchat prank? Equally angry and impressed I was just about ready to forget all about the non-existent Spectacles. On November 10th they finally announced how to get them and a new word for our vocabulary was created; Snapbot.

Spectacles were to be sold exclusively in a vending machine called a Snapbot. These minion-looking-soda-machine sized units would be secretly placed with their location finally being revealed after a countdown on the snapchat spectacles website.

The Snapbots would stay in that location until they sold out and then would disappear until then next location announcement. It became a scavenger hunt. First appearing at Venice Beach then a picturesque overlook in Big Sur. Next was a pond with a quirky tourist attraction in Oklahoma.

They even put it at the bottom of the Grand Canyon which required a helicopter to go to! No matter how difficult a location was for people to get to they went by the hundreds and most left disappointed as the Snapbots would sell out quickly.

To limit scalping Snap allowed two pairs of Spectacles to be purchased per person, getting a pair was not going to be as easy, but unknown to me at the time, luck was going to be on my side.

On November 21st Spectacles opened a pop-up shop in New York City that would house a Snapbot! I was going to Manhattan in December this worked out perfectly. Luck WAS on my side. When I got to New York I couldn’t wait to get ahold of a pair. Two actually. I had decided on the classic black Spectacles but also wanted the teal version just for fun.

Since winter was upon the Big Apple, the people in charge of the Spectacles store had a great system to prevent people from having to queue outside. Each day they would give out a set number of wristbands with your appointment time. It kept your wait down to about 90 minutes but inside the store. I arrived at my appointed time and waited in line until my turn. 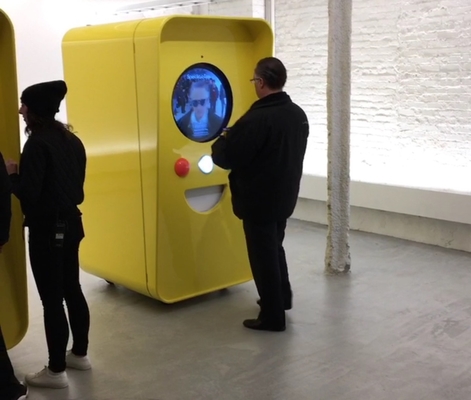 Visiting the Snapbot in Person

Seeing the Snapbot in person for the first time is impressive with how beautifully simple it is. I forgot all my frustrations from the month before of trying to get a pair as the Snapbot sprung to life.

With three large buttons to represent each color of Spectacles, a card reader, a large circular screen and a drop slot. It gave it the appearance of a face, albeit a face with that one cartoonish logo of an eye.

I hit the one of the color-coded buttons to select the Spectacles of my choice and you virtually try them on to decide if they are the one for you. After purchasing both the black and teal pairs I headed to the hotel to get them setup.

The Spectacles packaging reminded me of what tennis balls came in but larger. I popped the top and slid out the yellow sunglasses case and opened it up. Just like the photos on the website my pair of black Spectacles stared back at me a circle of LED lights nest to the left eye let me know they were ready to go.

I put aside the charging cable and Ghostface Chillah shaped cleaning cloth it came with and read the brief instructions. Setting them was super easy. A few taps on the Snapchat app and I was instructed put them on. Press the button on the left side of the Spectacles to activate the camera, and look at a Snapcode to pair them to my iPhone. It took all of 30 seconds from opening the app to getting the confirmation that they were ready to be used. I was ready to record some memories!

The first few hours I did what everyone does with a new camera; I recorded nearly everything. Scenic view, check. Getting a hot dog, check. Eating that hot dog, check. Chatting with someone, check. Using the Spectacles as a camera became second nature.

An LED that I could see while wearing the Spectacles let me know it’s was recording while an array of LED lights on the left side (same ones that turned on when I opened the case) activate a spinning animation to let others know you are recording. That same array tells me the battery life by tapping the left temple of the sunglasses.

How to view the recording?

To view the recordings you simply open the app and it automatically transfers the SD version to your memories section in Snapchat. I reviewed all the videos and then downloaded their HD versions. Now this is where things became a little difficult. Spectacles uses Bluetooth to communicate with my iPhone to transfer the video in SD quality.

For HD it required a WiFi connection. Once you select the memories you want in HD it asks you to leave the app, go to your settings, and connect to your Spectacles’ WiFi. It took several tries to see, much less connect to, my pair of Spectacles. 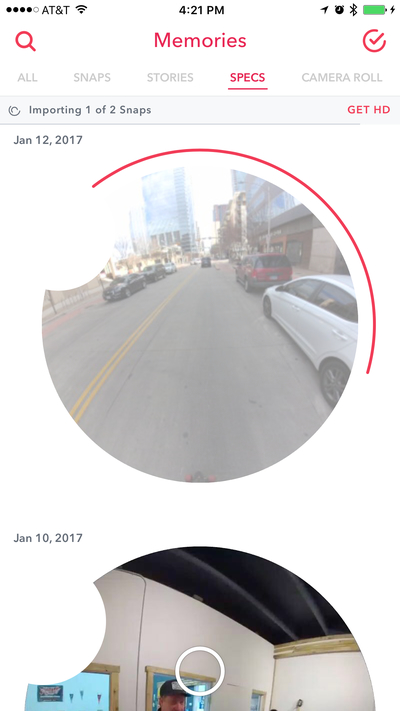 One of the best features of the Spectacles video is how it is viewed in Snapchat. Snapchat is the king of vertical video (aka portrait mode). Spectacles captures a wide 115 degrees of video, which would normally be a waste vertically.

What Snap has done is made a camera that records video as a circle, allowing you to turn the screen from vertical to horizontal and view in landscape mode OR portrait mode depending on your phone’s orientation.

The subject stays in the center and you see more of what is above and below in portrait mode and what is to the left or tight of the subject in landscape mode. Genius. Simply genius. Editing and posting your Spectacle snaps to Snapchat is the same as video recorded natively in the app. Add emojis, text, filters just as you would for Snapchat videos. I was in Spectacles heaven now.

Uploading my stories to snapchat

After uploading my stories to Snapchat I decided to export a couple of the videos to post them to Facebook, Twitter, and Instagram. The exported version is not the same as the one you see in Snapchat but instead a square, white-bordered, circular video that gives a fisheye view of all that was captured.

It actually makes for eye-catching posts on Instagram and Facebook because the circular style of video is so unique. At first I was curious about why Snap didn’t brand the border of the video or turn it into a Snapcode. I asked Sam Sheffer of Mashable his thoughts on that. He suggested it would have made it look not as clean. He’s right and Spectacles videos are more recognizable because of how clean and unique it really is. It is that reason that I like exporting the videos and sharing them outside of Snapchat. 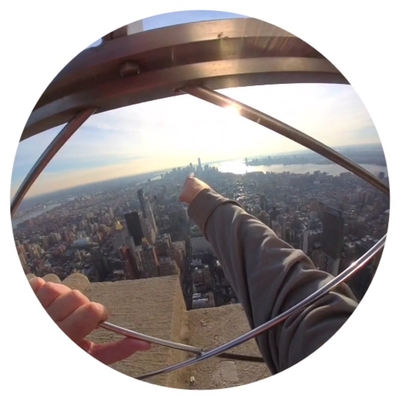 After using them over the last month I find them to be a part of my daily routine.

They are the sunglasses I wear every day and are at the ready to record a memory if I so choose. Some days I will not recorded anything, others days the opposite, and that’s the beauty of Spectacles. When something presents itself that I may want to see again or share I can easily with snapchat spectacles.

The first time I put them on, left my hotel room, and got into the elevator while in New York, there were two women on holiday from Paris already onboard. Neither of them had ever heard of Spectacles but complimented me on their style. The look on their faces when I told them what they could do was priceless! When they had no idea that those sunglasses had a wearable camera is exactly why I believe Snap got it right with Spectacles because they were sunglasses first, camera second.

Can you say the same thing about smartwatches?

I notice that most people who own smartwatches, including myself, do not use them for the main purpose of a watch; To tell time. I use mine as an activity tracker, for notifications of meetings, messages and phone calls. I have caught myself pulling out my smartphone to look at the time because I don’t think of my smartwatch as a watch. Spectacles on the other hand I always think of as sunglasses.

Snap has succeeded with Spectacles where most wearables have failed. They stay true to being sunglasses even though they are a camera. That is the genius of Spectacles and the lesson for other companies to learn when designing wearable tech.

How Can You Incorporate AR into Your Business?
Everything Is So Complex: How Do I Improve my App?

Are you also asking yourself this same question “How Do I Improve my App?” We’...

Why you need a Product Design Agency

Product design agency? You’ve heard the team before, but what exactly is it? How can a pro...